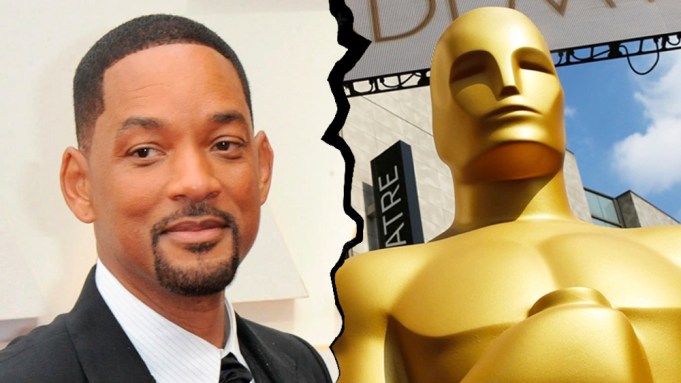 Will Smith (R) hit Chris Rock on stage during the Oscars ceremony, after Rock made a joke about Smith’s wife
Will Smith has been banned from the Oscars gala and other Academy events for 10 years after the US actor slapped comic Chris Rock at the ceremony.

In a statement, the Academy said the 94th Oscars had been “overshadowed by the unacceptable and harmful behaviour we saw Mr Smith exhibit on stage”.

Smith has apologised for his actions and resigned from the Academy.

The actor hit Rock for joking about his wife’s shaved head, a result of the hair-loss condition alopecia.

Less than an hour later, he was awarded the best actor award for his role in King Richard, where he played the father of tennis stars Venus and Serena Williams.

The Academy Of Motion Picture Arts and Sciences, which organises the awards ceremony, met virtually on Friday to discuss disciplinary action.

In a statement, it said banning Smith was aimed at protecting performers and guests and “restoring trust in the Academy”.

The Academy said that directly after the slap it did not “adequately address the situation in the room” and had been “unprepared for the unprecedented”. It apologised for this.

It also thanked Rock for “maintaining his composure under extraordinary circumstances”.

In his resignation statement, Smith said he had “betrayed the trust of the Academy” and was “heartbroken” over his actions.

He added he would “fully accept any and all consequences for my conduct”.

Smith’s resignation means he will be unable to vote for future Oscars.

The Academy’s disciplinary review over the incident, originally scheduled for 18 April, was fast-tracked after he resigned.

Few have ever stepped down from the Academy. Four members – producer Harvey Weinstein, actor Bill Cosby, director Roman Polanski and cinematographer Adam Kimmel – have been booted over sexual misconduct allegations, while actor Carmine Caridi was expelled in 2004 for pirating screener videos given to him.

But the standards of conduct laid out by the film academy contained various disciplinary options for Smith, such as excluding him from future Oscars ceremonies, revoking his eligibility for awards or taking back his newly won Oscar.

Only one Oscar has ever been taken back; a feature called Young Americans won the best documentary honour in 1969 but was found to be ineligible for the award that year.

Late last month, actor Whoopi Goldberg – a member of the Academy’s board of governors – predicted Smith would face “big consequences” but said “we’re not going to take that Oscar away from him.”

Beyond the Academy’s actions, at least two studios – Sony and Netflix – are pausing their projects with Smith.

Rock, who began his latest stand up comedy tour shortly after the Oscars telecast, has not commented publicly on the slap.

He told fans at a show last month that he is “still kind of processing what happened” and will talk about the incident “at some point”.

Will Smith has been banned from attending the Oscars for 10 years, the academy that hands out the awards announced, less than two weeks after the American actor slapped comedian Chris Rock on stage.

After a meeting of its board of governors, the Academy of Motion Picture Arts and Sciences said on Friday that Smith also would not be allowed to attend any other events hosted by the academy during that period.

“The 94th Oscars were meant to be a celebration of the many individuals in our community who did incredible work this past year; however, those moments were overshadowed by the unacceptable and harmful behavior we saw Mr. Smith exhibit on stage,” the academy said in a statement.

Smith walked on stage during the 94th Academy Awards ceremony in Los Angeles on March 27 and slapped Rock after the comedian likened the actor’s wife, Jada Pinkett Smith, who has a shaved head, to the movie character GI Jane.