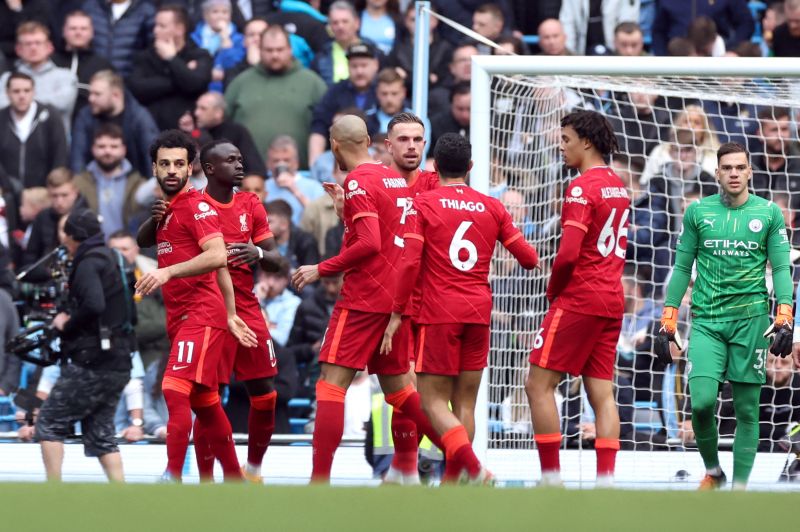 Manchester City retained their slender one-point advantage at the top of the Premier League as they fought out a classic draw with closest rivals Liverpool at Etihad Stadium.

The meeting between the country’s two outstanding sides lived up to its pre-match billing and in the end there was nothing to separate them, with the destination of the title still hanging in the balance with seven games remaining.

City flew out of the blocks to take an early lead through Kevin de Bruyne’s deflected strike but Liverpool were quickly on terms when Diogo Jota turned home Trent Alexander-Arnold’s pass.

Pep Guardiola’s side dominated a magnificent first 45 minutes but failed to convert a host of chances before Gabriel Jesus stole in behind Alexander-Arnold to restore their lead from Joao Cancelo’s cross nine minutes before the break.

Liverpool had been strangely nervous but came out rejuvenated after the re-start, equalising when Sadio Mane celebrated his 30th birthday by scoring from Mohamed Salah’s perfect pass in the 47th minute.

Raheem Sterling had a goal ruled out for offside as both sides pressed for a winner in this superb match, with City substitute Riyad Mahrez wasting a chance to win it in the dying seconds as he lifted his finish over the top.

Manchester City and manager Pep Guardiola may regret their failure to turn first-half superiority into a more meaningful advantage but they will not be wholly dissatisfied with the outcome.

There will certainly be no dissatisfaction with City’s level of performance, which was outstanding apart from a sloppy first 15 minutes at the start of the second half, during which Liverpool equalised and the reigning Premier League champions were on the back foot.

City’s supporters seemed happy enough with the final outcome, clearly living on their nerves in the closing stages knowing Liverpool’s threat and their capacity to strike at any time.

De Bruyne was at his imperious best, although Sterling struggled against his former club, his day summed up when arguably his most composed piece of play in a frenetic afternoon saw a low finish past Alisson ruled out for offside, while Liverpool’s keeper also denied him in the opening moments of the game.

City’s advantage at the top of the table is just that one point but knowing how formidable Liverpool’s challenge can be, you suspect Guardiola will settle for it with only seven games left and a fixture list that looks manageable.

He would have preferred the victory that would have opened up a crucial gap but City have survived their toughest fixture of the season against their most dangerous opponents largely unscathed.

This was never going to be the so-called title decider, no matter what the outcome. There is still the capacity for too many potential twists and turns to call it so soon.

Liverpool came into the game in outstanding form, on the back of 10 straight league wins and a club record eight successive away wins in all competitions.

And yet, they started with uncharacteristic unease and hesitancy, especially at the back where there were several nervous moments.

Even when they are off their best, Liverpool still possess ever-present menace and the poacher supreme Jota settled Jurgen Klopp’s side with a trademark finish for his 15th Premier League goal of the season.

Liverpool were fortunate to be only 2-1 down at half-time, although City keeper Ederson sent palpitations around Etihad Stadium when he lost control of the ball on his goal-line with Jota in close attendance, recovering to show nerves of steel and regain his poise.

Klopp clearly delivered some stern messages to his players at the break and Liverpool were much more themselves in the second half, Mane striking almost immediately and their pressing game finally rushing City into mistakes.

Liverpool may still be in second place but they are right in this title hunt. Like Guardiola, Klopp would have preferred all three points but he will not be unhappy with one from this wonderful Premier League spectacle.