Match report and highlights as Spurs miss chance to retake fourth place from Arsenal after goalless draw at Brentford; Ivan Toney hits post and bar for Bees as Harry Kane clears Pontus Jansson’s header off the line; Spurs fail to have a shot on target and are two points behind Gunners 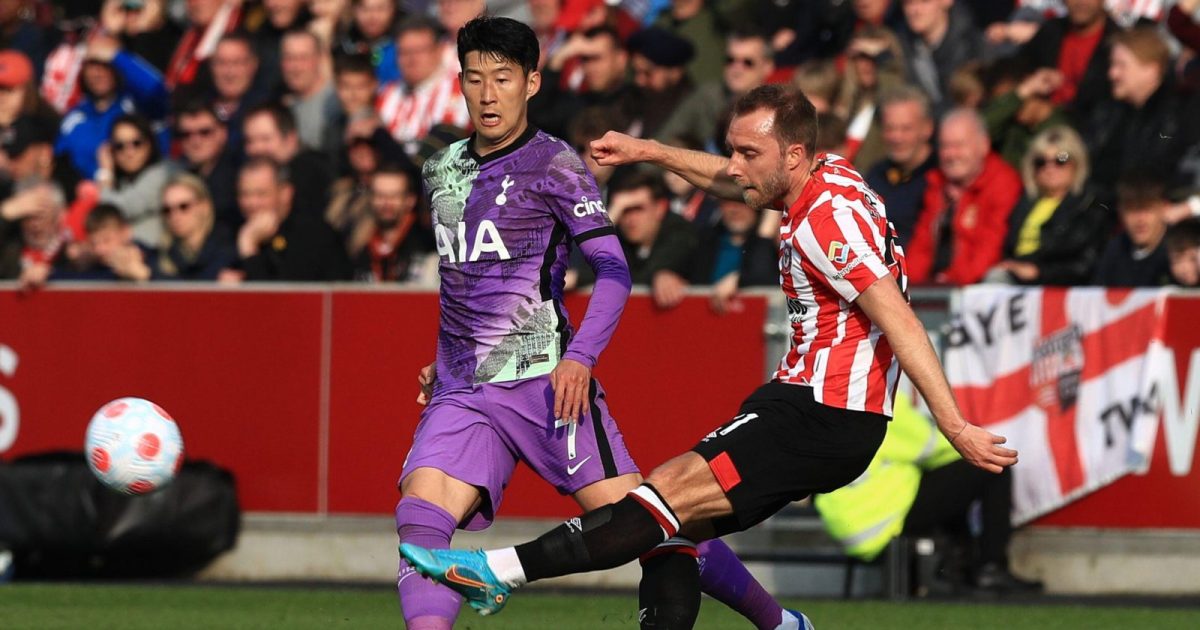 Tottenham missed the chance to reclaim fourth place from Arsenal after a disappointing goalless draw at Brentford that saw Antonio Conte’s side fail to have a shot on target.

Brentford striker Ivan Toney saw two headers hit the woodwork as he struck the bar (18) in the first half before heading against the post in added-time (90+1).

Spurs also needed a Harry Kane clearance off the line from Pontus Jansson’s header (66) to ensure they did not suffer a second consecutive defeat after last weekend’s home loss to Brighton.

Brentford midfielder Christian Eriksen, who was facing his former side for the first time since leaving Spurs two years ago, also went close twice for the home side.
The goalless draw means Spurs are fifth, two points behind Arsenal who moved fourth following their victory over Manchester United on Saturday.
Both sides have five games left to play, including the north London derby on May 12 at the Tottenham Hotspur Stadium, live on Sky Sports.
Brentford, meanwhile, are now unbeaten in their last four games with Thomas Frank’s side up to 11th in the table.

Spurs produce insipid display
Before kick-off in west London, Tottenham had been knocked out of the top four by Arsenal’s 3-1 home win over Manchester United.

And the pressure applied by Mikel Arteta’s side, coupled with last week’s damaging home defeat to Brighton, saw Tottenham start nervously as Brentford, buoyed by three straight wins, took control of the game.

Eriksen created Brentford’s best chance of the half as his corner was headed against the bar by Toney in the 18th minute.

Spurs were so underwhelming in the opening 45 minutes that their most threatening attempt came from Rodrigo Bentancur’s wild effort (28) that went well over.

Conte would surely have given his team a stern half-time team talk and it appeared to work as Spurs began the second half well, mounting more attacks with Kane having an effort (52) deflected over the bar by Bees skipper Jansson.

It was roles reversed 14 minutes later as Kane cleared Jansson’s header off the line. The rebound fell to Eriksen whose low shot from a tight angle was saved down low by Lloris and then scrambled away by Ben Davies.

Eriksen’s effort was his second in as many minutes, a shot from distance deflecting just wide of Lloris’ post.

Both teams came close to finding a winner in added-time as Toney hit the post from Eriksen’s free-kick in the 91st minute, with Bryan Mbeumo putting the rebound in the side-netting.

But it was a rare moment of quality in a poor Spurs performance that has handed the initiative to their north London rivals Arsenal in the race for Champions League football.

One of the big talking points ahead of the game was Eriksen potentially lining up for the first time against the club where he made his mark in English football.

It was always going to be a poignant affair, especially given how unlikely a proposition that seemed when the playmaker collapsed while playing for Denmark at Euro 2020.

Eriksen told Sky Sports News ahead of the game that the occasion would be a special one, and he produced a performance to match it.

Given licence to roam by head coach Thomas Frank, Eriksen was at the heart of Brentford’s attacking endeavours, pulling the strings and creating chances for the forwards. It was like he had never been away from the Premier League.

“I was playing Tottenham for the first time since I left, but it was lovely,” he said afterwards

“Of course the first pass is always the chosen one, seeing what happens today, and the first one went well and then after it’s ‘oh let’s play’ and the nerves are gone.”

“[Eriksen] is obviously fantastic. I think we are all happy he is playing football again and he’s enjoying it. You can see him playing with a smile.

“He played a good game today but I would say I think it was the whole team.

“I think against a full-strength Tottenham side and we have a lot of injuries and we had to move players around.

“[We were] without our normal two centre-backs, normal wing-back and normal number six – one of our most consistent players in Christian Norgaard – we kept Tottenham to more-or-less nothing.

“The front two of Harry Kane and [Heung-Min] Son, the most dangerous in the Premier League, were kept very quiet. Plus, we were good on the ball and we created chances. I think it’s an extremely impressive [performance].”

“It was a tough game. For sure, it was very difficult. They are a very physical team and they tried to exploit set pieces in a very dangerous way. I think defensively we were good but at the same time, I think we can do much better with the ball to create more chances to score. The intensity was very high and there were many tackles but we knew what type of game we were coming to play. It’s a draw and I think it’s important when you cannot win, you take one point, and we did that.

“We have to try to give our best [to finish in the top four]. Now we are in this race and we have to try to stay in it, but we know it is very difficult. We have to live this situation with great enthusiasm, and today was a good draw.”

“The performance wasn’t good enough. I was really surprised at how poor Spurs were. The two results that they have just had back-to-back are just not good enough.

“There are going to be so many mistakes, teams throwing away points, that’s how it is going to be. I don’t look at either side with a great deal of confidence. And I look at that game [that Spurs have] away at Liverpool, and I think that’s where everything will be won or lost, the title and the top four.”

Tottenham face Leicester at home on Sunday, May 1 – kick-off 2pm – and that is followed by two huge matches for Antonio Conte’s side as they go to title-chasing Liverpool on May 7 and then host top-four rivals Arsenal in the north London derby on May 12, live on Sky Sports.

Next for Brentford is a trip to Old Trafford, as Thomas Frank’s side play Manchester United in the Monday Night Football on May 2, live on Sky Sports; kick-off 8pm.