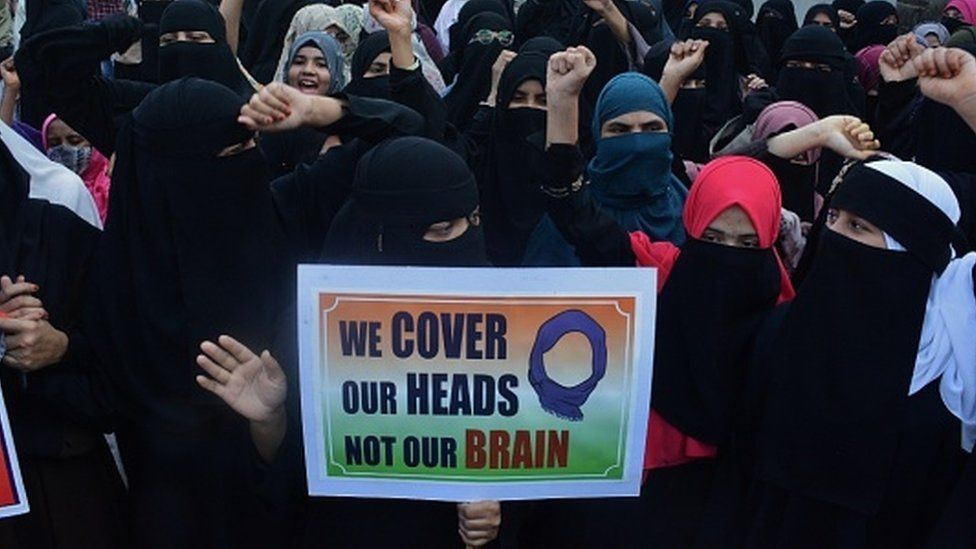 Her remarks came in the wake of a blistering controversy over demands by radical Hindu groups in the state to ban Muslim traders from setting up stalls at temple fairs. These groups have also been urging Hindus not to buy meat sold by Muslim butchers who kill the animal under the requirements of the community’s halal slaughter. (The animal’s throat is slit quickly with a sharp knife while it is still conscious.) Now the groups are seeking a ban on the use of loudspeakers in mosques, and a boycott of Muslim mango sellers.

That’s not all. In the past months, Karnataka has been roiled by tension over a government order barring entry to colleges of Muslim girls wearing hijab. A court has upheld the order, and many students have skipped exams and classes in protest.

Last year, the government banned trade and slaughter of cows in a state where some 13% of people are Muslims. There are plans to include the Hindu holy book Bhagvad Gita in the school curriculum, and a proposal to remove a chapter on Tipu Sultan, the 18th Century Muslim ruler of Mysore, because it glorifies him.

Many of these moves have polarised opinion, with critics seeing them as attempts at marginalising Muslims by Prime Minister Narendra Modi’s nationalist government. But this, many fear, could also backfire and end up sullying the image of one of India’s relatively prosperous states.

Ms Shaw tagged Chief Minister Basavaraj Bommai in her tweet and said Karnataka had “always forged inclusive economic development”. If [the city] of information and biotechnology “became communal”, it would “destroy its global leadership”, she said.

Her concerns are understandable. Karnataka’s economic success flows from Bangalore. More than 60% of the state’s revenues are generated from this lively and chaotic city of some 10 million people. It’s home to more than 13,000 technology start-ups. Some 40% of India’s 100-odd unicorns – unlisted companies with a valuation of more than $1bn – are based here. Thanks to Bangalore, the state generates 41% of India’s info-tech exports.

Yet Bangalore – and Karnataka – has been a divided place and experienced religious violence in the past. The info-tech industry bypassed Bangalore’s “internal conflicts” by basing itself on the outskirts, creating its own infrastructure and controlling the imaging of the city, said Narendra Pani, a professor of economics at the city’s National Institute of Advanced Studies.

Karnataka is central to Mr Modi’s push to expand the BJP’s fledgling footprint in the southern India. It is only one of five southern states where the party has won power. In a state which has a medley of castes, linguistic groups and religions, the BJP has won a majority of the parliamentary seats in four successive general elections.

For years, in the state’s coastal regions and villages, where a sizeable number of Muslims live, the BJP has pursued a politics of strident Hindu nationalism. The RSS, the BJP’s ideological fountainhead, has dug deep roots here. In the past, Hindu groups have tried to impose moral policing by attacking young men and women in pubs, and run campaigns against “love jihad”, a term radical Hindu groups use to accuse Muslim men of converting Hindu women by marriage.

For long, electoral politics in Karnataka was determined mainly by caste allegiances. BS Yeddyurappa, who led the BJP to its first win in 2008, forged a successful coalition of Lingayats – who account for about a sixth of the state’s voters – and other disadvantaged castes. But a faction of Lingayats want themselves to be treated as a separate faith from Hinduism, and there are demands among the disadvantaged castes for increased affirmative action. “Under pressure, the BJP is now trying to forge a different politics. It is trying to create an electorate based on Hindu nationalism and development,” said Sugata Srinivasaraju, biographer of HD Deve Gowda, the only Indian prime minister to hail from Karnataka.

Mr Bommai, a low profile 61-year-old politician, took over from Mr Yeddyurappa last year. Critics say his government’s performance has been underwhelming. There have been allegations of mismanagement of the pandemic. An internal review found that half of the government’s departments have been underperforming, according to a report in The File, a respected local news and investigation website.

Corruption is also holding back development. In a stunning move last November, the state’s private contractors wrote to Prime Minister Modi complaining they had to pay up to 40% of a project cost as bribes to ministers and officials. There are reports of unspent development money, unpaid salaries to transport workers and delayed scholarships to the disadvantaged. State elections are due next year. “Hindu nationalism appears to be the only card the government can play. They have little to show by way of major achievements,” said Chandan Gowda, a professor of sociology at Bangalore-based Institute for Social and Economic Change.

A day after Ms Shaw’s comments, Mr Bommai appealed to people to “cooperate in maintaining peace and order”. “Karnataka is known for peace and progress, and everyone should observe restraint,” he said.

There has been some pushback from within Mr Bommai’s party. At least two BJP legislators have minced no words. Banning Muslim traders from Hindu temple festivals is “nothing but untouchability… It is an inhuman practice,” AH Vishwanath told BBC Hindi. Added Anil Benake, “We will not stop Muslims from doing business at temple festivals.” In a show of solidarity, Hindus have also lined up outside Muslim butcher shops to buy meat.

All this offers hope, but more needs to be done. “To give Karnataka’s politics a religious turn has been a persistent effort for two decades. Over the years, opposition parties, most intellectuals and businesspersons have remained silent or have been calculative in their response. They need to speak out boldly without trying to falsely balance their opinion,” says Mr Srinivasaraju.